Well, my short story, The Dead Should Stay Dead, has been live since Saturday. It can be found world wide on Amazon and I've got 3 four star reviews, plus one five star review. I also have three likes.

Here's the nicely designed cover that my good friend and editor put together for me: 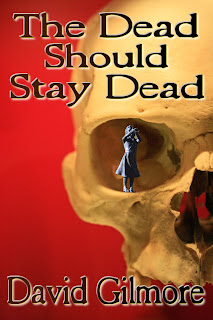 I know it's different from the old cover I intended to use, but I had to scrap that story idea. And I've learnt not to talk about projects now until they're practically done, so no one ends up being disappointed if something doesn't get finished. It would be much easier if I planned and didn't have high standards, really.

Anyway, the story can be found on Amazon, world wide, with these being the UK and US links. Please see the story on the store for the story's description and word count.

Now then, I have a bit of a surprising story to tell and a caution for fellow writers publishing for the first time on Kindle. My initial debut rank was 64,000 and odd in the UK. That was with one sale. With another sale, it shot up to 24,000 and odd, plus it entered the top 100 in one of the categories. #39, I believe, for books > short stories > horror (so it was competing with paperbacks and not just kindle eBooks). The highest it reached with one extra sale, Bodicia's I believe and her blog can be found here (I really appreciate you buying a copy and I'm glad you enjoyed it if you read this), is #17. With it being in the top 100 for a category, you'd expect high sales right? (one sale in the US translated into a 146,000 sales rank or so, I think, highest being 116,000, but I think it was 146,000)

Don't. Because I'm now sure I've only had 3 sales, plus one in the US.

How does the Amazon sales rank work then? When you first publish a story, it will shoot up the ranks with one sale. The UK sale rank is especially susceptible to this, with the UK being a smaller country than the US and therefore not having as many sales in the store. Now, your story's recent sales are compared to those of others within the same category and, indeed, within the entire Kindle store to determine the rank. Updated every hour. But the sales rank for new books without more sales will drop more quickly than it will for older books. Why? Because older books are more established and the sale rank is partly based on historical sales too. Older books won't be as affected by more sales either, I believe, if they've had a lot in the past.

So, again, all of this is to say 'don't get excited' if your book shoots up the chart once it's newly published. I've learnt from the experience and I wanted to prevent others from getting all excited when it's likely you don't have many sales. Also, I think there's a delay with sales updating on your records, but I'm still sure my figures are right now. However, with all this said, I must admit there was some satisfaction in beating the sales rank for some of Stephen King's works, although it was only briefly. ;)

So, with four sales, where does it leave me? It leaves me in the same spot I was always in, especially as I never expected many sales nor did I expect a short story to sell well. I'm going to keep on writing, building a backlist, but as it seems there is no demand at the minute really, I don't have to feel pressured to keep publishing. It'll give me time to build up a backlist. That said, I still want to encourage people to take a chance on my short story, as long as you read the description and know how long the eBook is. And as long as you can stomach some gore or enjoy horror. I think I've done a good job on it, because -- believe me when I say I have high standards -- I wouldn't have published it if I thought otherwise.

In the afterword and about me, I've said that I'm not a genre writer, but you can probably expect the next few titles to reside within the horror genre. That is still true, but as I don't want to be pigeon-holed, it is possible the next story from me won't have any horror elements. Ideally, I want a backlist that offers something for every reader. I've got a list of projects I want to work on now and it depends on which I finish first. In addition, as I mentioned above, I'll be keeping quiet on what they're about and I won't be showing covers in case there's disappointment if I don't finish them.

Finally, I would want the next story I publish to be at least novelette length, which is 7,500 - 17,500 words. So, you'll get more bang for your money, though I'll charge slightly more (probably set a price point for each category: short story, novelette, novella and novel). However, every story from me will be the length it needs to be. I won't be artificially extending them to reach a word count. That's part of the beauty with eBooks and self-publishing really, you don't have to write to a specific word count to please publishers. And while the pricing is mentioned, the US version of The Dead Should Stay Dead should be $0.99. If it's more, I don't know why. It's a fault on Amazon's end and I might need to contact them. So, if it is showing as more than $0.99 for people actually in the US, then please let me know. I already view $0.99 as too much to ask for, for a short story. So, it is not my intent to rip you off. I wouldn't have included the extras either if I didn't want to try and give value for money.

And lastly, I want to thank the people who have bought my short story and for the support shown. It means a lot to me.

One last plug as well, with links to my story (and again, check the word count before purchasing, please):